I Guess We're All Supposed To Talk About 5th Ed.

And, since my wife is out of town and I don't have much else to blather about (other than a Feng Shui adventure that steadfastly refuses to write itself), a few thoughts on the new edition.

But there are a few things I'd love to see in a new edition:


A retreat from the omnipresent tactical nature of the game.  As much as I enjoy shoving little toy monsters around a grid, I don't want it to be the be-all end-all of the game.  Many years ago, Robin Laws wrote "The map is not your friend" in what may be the most combat-happy RPG of all time (Feng Shui).  Truer words were never writ.

A break from the "Three Encounters And You're Done" adventure model.  Please, by the hoary ghosts of Gygax and Arneson please, get away from this.  Let's go back to being able to explore a dungeon of multiple rooms and encounters in a single game session.

No more Skill Challenges.  Hell, for D&D, I'd be happy with getting rid of skills entirely.  I never used them in earlier versions of the game, unless you count Thief's abilities.  While there are some problems with the scaling, there's a lot to be said for Castles & Crusades' SIEGE Engine, which neatly stripped skills out of d20 without breaking anything.

I want spellcasters to be spellcasters again.  I don't want Fighters and Spellcasters to basically do the same stuff, just with different names.  One thing I really admired about 3.5 was that with very little modification, you could turn it into a gritty, realistic low-fantasy/historical game.  There's just no way in hell 4e even pretends you can do that.

Make magic items magical again.  In 3.5, they became a required and expected part of character advancement.  In 4e, they became even more flavorless, if that was possible.  Let's put the magic back and make it meaningful.

Let's go back to viable small or large parties.  While 3.5 and 4e don't exactly require a group of 4-5 PCs, they are optimized for it.  And that actually kind of sucks if you've got too few or too many players.  Back in the days of 2e and earlier, this was much less of a concern.  Of course balance was also much less of a concern.

Mostly, I want that last one so that I don't have to try and recruit a bunch of folks when my son wants to play D&D with me.  If I can run viable games that don't require ridiculous amounts of mental gymnastics and hand-waving for just one or two players, I will happily play 5e and buy the hell out of stuff for it.

(And while you're at it, release the older stuff on PDF again.  It would be a tremendous act of goodwill for the folks who prefer the earlier editions. There's already huge amounts of this stuff floating around on the web that can be obtained illegally.  The way I see it, if even one person in ten downloading it paid for it, that's money in your coffers you're not seeing now.)
Posted by Theron at 8:24 PM 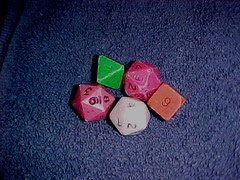